Here Comes Fashion Month: What Matters This Season and Why 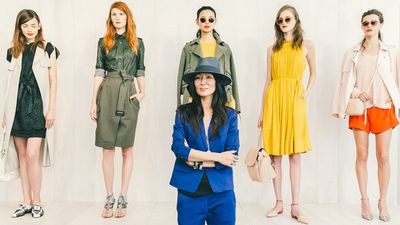 Fashion Month kicks off with the New York shows this week, marking the beginning of fall 2015 (and here you were thinking it was February). Here’s a guide to the nine most important designer appointments, brand debuts, show relocations. From Kanye and Adidas at NYFW to Tom Ford in Los Angeles and Galliano’s first ready-to-wear collection for Maison Margiela, what to keep an eye out for this season.

Wednesday, 2/11: VFiles will open New York Fashion Week (technically a night early) with a late slot at Lincoln Center. This is a far tamer, more corporate venue than the store slash social platform typically selects to show of its quartet of new designers. (Spring 2015 was shown at concert venue Webster Hall, which we sent Eater restaurant critic Ryan Sutton to review. At the show, he noted his “digital reader frequently registered 100 decibels, which is about as noisy as a commercial jet taking off from 300 meters away.”) A rowdy start to the final NYFW at Lincoln Center, a venue that no one will mourn.

Thursday, 2/12: Kanye West and Adidas will show the fruits of their collective labor after much teasing on social media. Expect to see the Yeezy 3 Boosts, the tracksuit he wore to perform “Only One” at the Grammys, and a press explosion of Kanye-size proportions. Keep an eye on Ye’s Twitter, where he’s been dropping nuggets like the seating plan and this countdown link.

Saturday, 2/14: In J.Crew fashion, mall brand Banana Republic will show at NYFW Saturday evening. This isn’t surprising, since they have been working to drum up excitement over new creative director Marissa Webb (who’s own show is Thursday afternoon, for comparison’s sake).
Under Webb, Banana did stage an off-season presentation to debut her first delivery for the brand, which will be in stores April.

Tuesday, 2/17: It’s Oscar without Oscar for the very first time. After 82 years on Earth, Oscar de la Renta passed away in October, just one week after naming his successor, Peter Copping, who comes from Nina Ricci (more about his replacement there in our Paris section below). Copping did have a hand in the label’s pre-fall collection, finishing what de la Renta had started, but now we’ll see his solo vision for the glamorous brand.

Friday, 2/20: The big news in London isn’t even in London (poor London). Tom Ford is abandoning his slot in LFW to show, instead, in Los Angeles. That means those making the trip from New York to London may have to take the very annoying detour three time zones west to attend the show (just checking out who makes the trek will be curious in itself). Ford explained that the decision was in part because the Oscars are on the 22nd, and he’ll be in LA for fittings, so instead of trekking to London and back, he’s having the industry meet him there. And they will.

Gucci: Brand new creative director Alessandro Michele will show his first womenswear collection following the recent ousting of Frida Giannini. Michele was promoted from head accessories designer and did a rapid-fire makeover of the men’s runway show following Giannini’s early departure, pulling together a completely revamped show in one week.

Hermès: We’ll have our first look at Nadège Vanhee-Cybulski’s work as artistic director for the French brand, replacing Christophe Lemaire, who left to focus on his namesake label. The new designer comes straight from the role of design director at The Row, and before that, Céline. Expect the best in luxury restraint.

Nina Ricci: With Peter Copping moving over to Oscar de la Renta, Guillaume Henry is taking the reigns at Nina Ricci, coming from Carven, which he retooled from established couture house to well-merchandised ready-to-wear brand with wholesale accounts out the wazoo.

Maison Margiela: John Galliano has re-entered the fashion universe via Maison Margiela. While we’ve seen his work for men and couture, this will be the first womenswear collection he shows the world—and, importantly, buyers—since his 2011 firing from Dior following an anti-Semitic rant captured on video.