A Farewell to Band of Outsiders 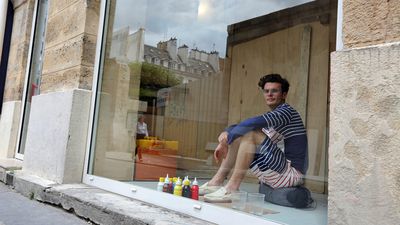 When I saw the news last week that Band of Outsiders was closing, it was like hearing about an unexpected celebrity death. (Or perhaps all celebrity deaths are expected?) I gave a sharp intake of breath, said, “No!” and wanted to have the first and most legit lament on social media.

Their best shirts quietly declare what they are, rather than shout it.

Band of Outsiders is my favorite brand of shirt. Generally, I think the very concept of declaring a “favorite” anything is useful only for sorting friends when you’re a child (“My favorite color is purple. You too? No way!”), or when posting a dating profile (“Your favorite book is Ethan Hawke’s The Hottest State? No way! Me too!”). But Band of Outsiders shirts are my favorite. They make me feel cooler than I am, helping me inhabit at once the present and an idealized 1970s/early 80s. (I do that already in my head, but it’s harder to pull off sartorially.)

Like someone who never goes to a diner, bookstore, or pub, and then complains when it closes down, I’m part of the problem. I would only buy their shirts after a second or third markdown. Barneys and Opening Ceremony were good for this, though of course you might not get the exact shirt you fantasized about wearing. But my dream was to get baller enough to thoughtlessly pay full $ 250 retail instead of around $ 90 for a button-down (hey, made in the US, and good for years and hundreds of wears). The other part of my dream was to get baller enough to be a friend of the brand, like Aziz Ansari. I had no idea how this would happen.

I once saw Adam Scott’s character on Parks and Recreation wearing a Band of Outsiders shirt I own, a blue oxford with double narrow yellow vertical stripes. Almost like faded Milwaukee Brewers colors. It was exciting to see, but I thought it was almost too flashy a wardrobe choice for that humble character. The blue is a little richer than standard oxford cloth blue, and the double stripe is saying something slightly more thoughtful than your standard oxford.

That shirt is the sort of thing the label does so well, tweaking standards just a degree or two to make them more evocative and sublime—if you believe a high-casual button-down can achieve sublimity. But this is all only revealed after a close look. Their best shirts quietly declare what they are, rather than shout it.

It’s good to celebrate and embrace a connection with a cultural entity when it happens.

I have around ten Band of Outsiders shirts that I’ve acquired over the last five years, and one pair of sweatpants (those were a mistake, as lots of folks are doing stylish sweatpants now). I’ve always treated the shirts carefully, not washing them too often, and always letting them line-dry. But I don’t believe in babying clothes. If you like something, wear the shit out of it. So when these go, that’s it. They cannot be replaced.

Right now I’m wearing their black long-sleeved t-shirt with Atari symbols across it in mourning ($ 44 on Yoox). They’re not gone yet! I remind myself. This is more like a death-bed vigil. Band of Outsiders always felt more like a wearable art project then a label that would be around for fifty years.

I know a mid-sized clothing brand folding is far from a tragedy. This is on the scale of a great restaurant shutting down: one that through food and a space hosts a scene and represents the possibilities of its time. There will be new It restaurants, there will be new brands that represent something about who you want to be. It’s good to celebrate and embrace a connection with a cultural entity when it happens. Even if you can only make it to the restaurant at happy hour, or get the clothing on sale.