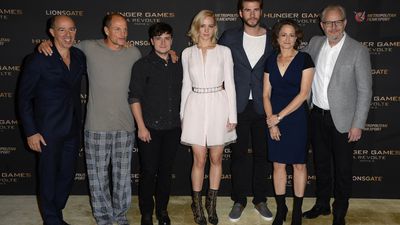 The Hunger Games cast continues their world tour to promote the release of the fourth and final film in the franchise, Mockingjay Part II. Most of the time, this involves the stars — Jennifer Lawrence, Julianne Moore, Liam Hemsworth, and many others — dressing up for the occasion in designer dresses and flashy suits. And then there’s Woody Harrelson, who evidently rolled out of bed this morning, forgot one very crucial step, and went to work.

While the star of the film, Jennifer Lawrence wore her usual Dior to this morning’s photo-op in Paris, a certain cast member opted for no clothes at all. Instead, Woody Harrelson wore a t-shirt, plaid pajama pants, socks, and nothing else.

To be fair, however, Woody Harrelson eventually woke up and put on actual clothes for tonight’s premiere.

Next to Liam Hemsworth’s tux, however, it might as well still be pajamas.