Everything You Missed From the Teen Choice Awards 2015 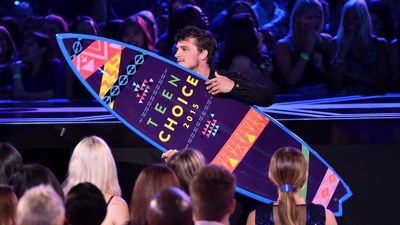 The Teen Choice Awards 2015 came and went in a flurry of youth and internet celebrity. The teens voted on favorites in music, movies, TV, sports, and so much more. Check out the blue carpet here and the highlights of the show below.

Sarah Hayland of Modern Family fame stumbled before presenting the first award of the night, then shouted “Are you fucking kidding me?” which she was well within her right to do.

English girl group Little Mix walked the blue carpet in the nerd clothes from their “Black Magic” video, then managed to pull off one of the quickest costume changes ever while on stage.

Cara Delevinge’s name continues to trip up the most well-meaning of us, including host and Jane the Virgin star Gina Rodriguez.

The Empire boys performed “You’re So Beautiful” with a special appearance by Gabourey Sidibe.

John Stamos, 51, showed up and proceeded to act like such a daaaaad with Wiz Khalifa. Wiz Khalifa, on the other hand, acted like a dad by bringing his son Sebastian to walk to the blue carpet with him.

Robin Thicke closed out the night, but we made it through entirely Kardasho-Jenner free, so you win some, you lose some. At the very least, it’s a great way to kick off #NoKardashiansForAWeek week.