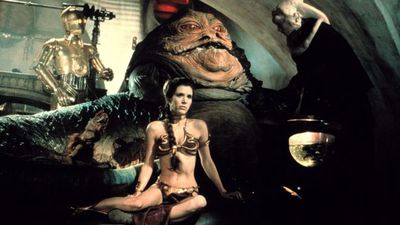 Aside from the Victoria’s Secret diamond-encrusted bras, Princess Leia’s gold bikini might just be the most expensive small bit of material on the market. The exact bathing suit worn by Carrie Fisher in Star Wars: Episode VI – Return of the Jedi, has just been sold for $ 96,000 in an online memorabilia auction.

According to BBC, the bidding at US firm Profiles in History started at $ 80,000, and was presented in a bundle with a collar, chain links, and a letter of authenticity from Richard Miller. In the 1983 film, Jabba the Hutt, giant froglike manflesh, forced Princess Leia to wear the skimpy outfit.

The costume, made of “flexible, gold-painted red dense-urethane rubber,” was famously despised by Fisher, who referred to it as, “what supermodels will eventually wear in the seventh ring of hell.” If only today’s supermodels wore that much. At least someone knows what they’re being for Halloween this year.