Tim Gunn and Anna Wintour Have a ‘Hostile’ Relationship 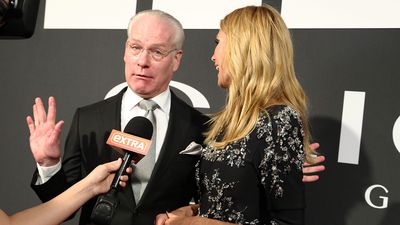 Tim Gunn and Anna Wintour are among the most famous personalities in fashion, yet the two don’t exactly get along. The fashion consultant appeared on the Meredith Vieira Show, where he was asked about his relationship with Anna Wintour. He initially put it, “I just will say that when people misbehave around me, I call them out on their bad behavior.” Vieira barely had to pry to get the Bravo star to expand on what happened between him and Vogue‘s editor-in-chief.

When the New York Post asked Gunn to describe the most unforgettable moment he’s ever seen in fashion, he recalled the time he caught Anna Wintour “being carried five flights of stairs from a fashion show.” After his words were published, the office of the notoriously tough Wintour demanded a retraction for the completely true statement. Gunn defended his answer to the Post‘s question, noting that Anna’s mode of transportation was simply “a matter of speed.” He did add that the sunglass-wearing editor is “a history revisionist.”

Their relationship is still “hostile,” but Tim doesn’t seem to mind, closing the conversation off with “I’m happy to have a bad relationship with [Vogue] because I wouldn’t want to have a good one!” Ouch.