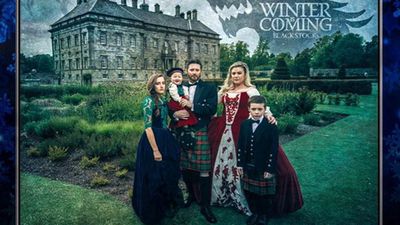 Welcome to Day One of our 12 Days of Celebrities Celebrating amicable holiday smackdown! Though there’s still a few weeks before Hannukah, Christmas, and New Year’s Eve are over, the celebrities —  along with their pets, stalkers, and Instagram followers — want you to know that they’re already making the most of the occasion.

But only one celebrity can be having the Most Fun Ever (today). Here are your runners up and winner for Wednesday, December 9th:

Boy, does Eddie Redmayne’s suit look like it’s having a great time. It’s the only month of the year when a suit like this doesn’t look completely ridiculous and instead manages to seem like a totally justified choice for a new SAG Award nominee.

Runner Up #1: This Soldier

And finally, today’s winner is everyone on Kelly Clarkson’s Christmas card list, therefore getting to physically hold this majestic Game of Thrones–themed work of art in their hands.

In it, Kelly Clarkson stands proudly alongside her kilt-wearing husband Brandon Blackstock, whose name would certainly not be out of place in Winterfell, as well as his son, daughter, and their baby River.

Another reason this Photoshop creation is magical: E! Online posits that the words “Winter is Coming” could be a nod to the name of their expected baby boy — especially since Clarkson hashtagged the photo “#winteriscoming #riverisnotworried.”

What appears to be a Mrs. Claus costume: 100

Teen girl who’s way too cool to smile for your dumb Christmas card: 10,000

In the tradition of the 12 Days of Christmas, Kelly Clarkson’s Christmas card list shall be awarded “One year of wondering whether Kelly Clarkson will actually name her son Winter.”