Believe It Or Not, Weaving Needles Through Yourself Is the Non-Invasive Alternative to a Face Lift 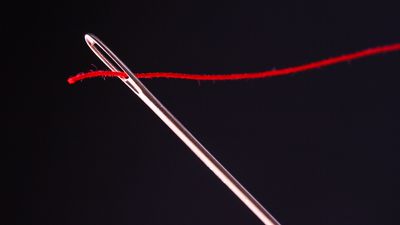 Celebrities and affluent alike are flocking to Europe and Asia to undergo a new surgery that is being heralded as a new, improved, and less-invasive face lift. Goop explores the world of threading, which involves taking sometimes-barbed needles, weaving them through the skin on a patient’s face, knees, neck, etc., and delicately pulling the skin up. Allegedly, the result is wrinkle-free skin that does not disable you from showing emotion like Botox does.

Goop spoke with two doctors who perform different variations of the threading procedure. The first is Dr. Maurice Dray who performs the threading procedure in clinics in London and Paris. Dr. Dray uses a special sugar thread that can remain in the skin — stimulating growth of new skin tissue all the while — and eventually dissolves on its own after four weeks. Dr. Dray says that the process of inserting the threads takes only 30 minutes total and many patients begin to see results after only a month. He also believes that the process will be available stateside soon. “There are no side effects; the results are successful; it’s natural and safe,” he says of threading. When asked for an example of price, Dr. Dray offered up: “$ 1,850 for the neck.”

The other person known for threading is Dr. Woffles Wu, who invented a new threading process and has been teaching it to fellow physicians worldwide. In his own words: “The Woffles Lift is the most innovative approach to face-lifting in the last 100 years. It is a paradigm shift in facial aesthetics—a non-surgical procedure that can lift sagging soft tissues, rejuvenating and reshaping the face without having to delaminate any soft tissue or create unsightly scars around the ears.”

The Woffles lift involves using barbed needles that elicit a reaction in the skin that prompts growth of “new ligaments” that hold the skin up. It also takes only 30 minutes to complete, and so far has shown to have much less severe side effects than a traditional face lift. However, the procedure doesn’t come cheap — prices range from $ 11,000 to have the full face done or $ 4,500 for just the forehead and brow.