Sarah Jessica Parker Thinks You Should Give ‘SATC 2’ Another Watch 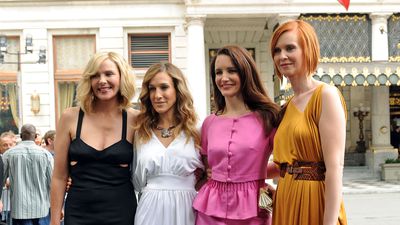 At this point, the often-controversial yet ultimate triumph that was HBO’s long-running series Sex and the City is nearly always mentioned with an aside about the film’s ill-received sequel. Critiqued as both unrealistic and racist, Sex and the City 2 is probably the darkest smear on the history of the show — but its star, Sarah Jessica Parker, as well as Billy on the Street host Billy Eichner, thinks you should give it another try.

In a clip from this Thursday’s episode, Billy asked her the question all SATC fans have been dying to know: Does she even care at all? She replied:

Sarah Jessica Parker: I think what was surprising was the level of vitriol that was leveled at it.

Billy Eichner: Let me tell you what I think. I think enough years have passed now that we can openly discuss it as a nation. I think that that show had dealt so well in such a smart, sharp way in dissecting guys that all the bros out there really liked the chance to jump on it finally. People said they didn’t believe them going to the Middle East, and I have one friend who’s into sci-fi and was like, ‘It’s not believable.’ And I said, ‘You can’t believe they go to the Middle East but you believe in fucking Chewbacca, you fucking turd? They can’t go to the Middle East but you believe anything that happens on some planet George Lucas made up, but you can’t believe that Kim Catrall would film for a few weeks in Morocco?’ I’m so glad to finally be getting this off my chest.

SJP: You’re saying things that I never would have had the courage to say. It did make amount an enormous amount of cash.

They go on to play a quiz (spoiler: Sarah Jessica Parker wins, and then receives a Tickle Me L. Ron Hubbard doll that says, “We deserve tax-exempt status” in an Elmo voice). Watch: