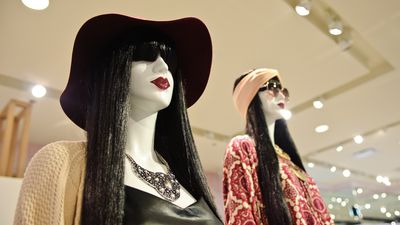 NYC-based blogger Natalie Holbrook has publicly apologized for a recent product post after readers took her to task for pushing Forever 21 product—after she explicitly said she would quit. According to Get Off My Internets, Holbrook blogged last March about her “personal odyssey” towards ethical living, swore off shopping at Forever 21, then relapsed and posted an article titled “What You Should Be Buying At Forever 21 Right Now” at the start of New York Fashion Week last Thursday. When readers called her out, she admitted that she had primarily done it for the money:

I made the decision ultimately. I mean, I missed [the Forever 21 posts] too. They’re hella fun. They were also a small help in the income department, and I’d be lying if I didn’t tell you the straight truth: the Holbrooks can’t comfortably afford private pre-k. BUT OH WELL, CONTRACTS. After talking it over with many people in my life who know me well and who thought me ridiculous for not continuing to write all along, I decided to bring them back. I hoped it’d make everybody happy, including my husband who sometimes asks, “hey are you getting another paycheck anytime soon?” So I wrote one. It didn’t feel right, but it also didn’t feel wrong. So I wrote a second one. The second one felt wrong. It was fun, I was proud of the entertainment quality, but I didn’t like looking at it. So I published my Friday post earlier than I normally would have so it wouldn’t be at the top of the page anymore. And then I tried to forget it and figured it would be more fun than not and that life would go on.

Holbrook made it clear that she wouldn’t be continuing to publish Forever 21 product posts in the future.