Donna Karan Steps Down From Her Namesake Brand 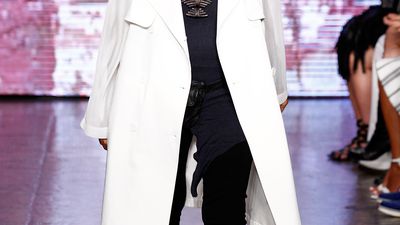 But big changes are ahead for her brand. DKI is suspending Donna Karan Collection’s runway shows and collections for now, and doesn’t plan to look for a replacement for Karan as chief designer. Instead, it will support the Karan brand through its license business, and will reorganize to focus on DKNY.

Back in April, Donna Karan handed DKNY off to the designers of buzzy label Public School. WWD’s sources say that the Donna Karan Collection line may be merged into DKNY to offer a wider variety of price points.

Karan’s departure has been rumored, with the DKNY designer transition and the departure of her long-time PR exec in May. “LMVH and I have made this decision after much soul-searching,” Karan said. “I have arrived at a point in my life where I need to spend more time to pursue my Urban Zen commitment to its fullest potential and follow my vision of philanthropy and commerce with a focus on health care, education and preservation of cultures. After considering the right time to take this step for several years, I feel confident that DKI has a bright future and a strong team in place.”

Donna Karan’s Next Journey After much thoughtful discussion and in partnership with Donna Karan International and LVMH, our visionary founder, Donna Karan, has made a personal decision to step down from her day-to-day responsibilities as Chief Designer for Donna Karan International. She will remain with the company in an advisory role and will dedicate her focus on her Urban Zen Company and foundation, which she founded in 2007. Over the past three decades, Donna Karan has inspired women around the world to embrace their power and sensuality. When she started her collection in 1985 she set out to simply make clothes for her and her friends. A little collection of simple black pieces that was all about need and desire. She quickly found out that she wasn’t alone- she had a lot of friends out there. Her philosophy of a sophisticated system of dressing, “her seven easy pieces” revolutionized the working woman’s wardrobe. Donna Karan is an icon, visionary designer and a passionate philanthropist. She believes in dressing and addressing women. Her impact on American Fashion has been extraordinary and she will continue to influence and inspire for years to come. We honor Donna today and always. We look forward to celebrating her past, present and future in her memoir, which is due out in October 2015. #DKNY