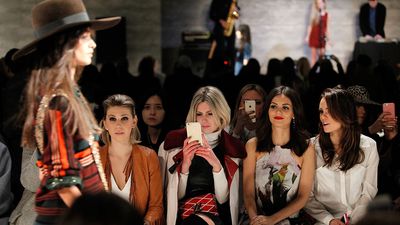 Rebecca Minkoff is officially on board with virtual reality. The fashion brand is one of the first to capitalize on the technology, having filmed a runway show for VR that’s viewable on a $ 24 cardboard headset that went up for sale on rebeccaminkoff.com (it’s already sold out online but a few are available in retail stores). After a quick assembly that promises to take less than a minute, users can download the show onto their Apple or Android phone, pop the phone into the cardboard headset, and get an instant, immersive look inside the final walk of Rebecca Minkoff’s Fall 2015 show.

It’s not something to watch passively. Move your head and look up and down, and you’ll swivel from the runway to seeing rows of photographers or people whispering to each other in the audience as models emerge from backstage and music thumps on the soundtrack. It’s an almost panoramic view.

Rebecca Minkoff CEO Uri Minkoff told Racked that the brand first became interested in virtual reality at the end of 2014. “When we filmed our runway show in VR, you could count the handful of professionally-made VR experiences available for the iPhone on one hand,” he says via email.

The technology has evolved, Minkoff testifies, and is an exciting way to bring the runway experience to anyone around the world. “We’re the first fashion brand to democratize access to VR by making it available to our audience at home, or anyone who has a Google Cardboard headset,” he says. “The great thing about our platform is that it doesn’t require a super-expensive computer. For $ 20, you can put your phone into a cardboard headset and be transported to the front row at our fashion row.”

The Minkoff headset is a fashion-ified version of Google Cardboard, which has actually been around for more than a year. VR headsets have existed for lot longer than that, but Google was one of the first to make the experience more accessible by developing a simple, cheap cardboard headset that works with a smartphone and is easy to assemble.

The runway video was filmed with Jaunt, a two-year-old company that has quickly become one of the biggest names in the VR field. While the Rebecca Minkoff film is the first to display virtual reality on a runway, this isn’t Jaunt’s first foray into fashion. The company worked with Elle to film an immersive fashion shoot last year, and 7 for all Mankind partnered with Jaunt for a virtual reality film called “Visions of California.”

Rebecca Minkoff has a history of being quick to new technology. The retailer has partnered with eBay to design “connected” stores with touch screens in fitting rooms that help customers shop and even take drink orders. The designer has also worked with Case-Mate on a tech wearables and accessories collection.

“As a brand, we’ve always been ahead of the curve when it comes to emerging technologies,” Uri Minkoff says. “Rebecca was interacting with our consumer on fashion blogs long before other designers came out of the ivory tower, and we were very early to Facebook, Twitter, Tumblr, Instagram, Snapchat, and live streaming technologies like Periscope. We’re a little early to virtual reality, but we think consumers are going to see a lot of VR content starting at the end of this year.” The Minkoffs think VR will play a key role in shopping in the future.

This season, however, Rebecca Minkoff is going take a break and wait for other brands to catch up with them on VR. “We’re waiting for the technology to evolve a bit. We’ll let other brands follow in our footsteps this season, and we’ll come back in a few months with a VR experience that sets the bar even higher,” Uri Minkoff says.