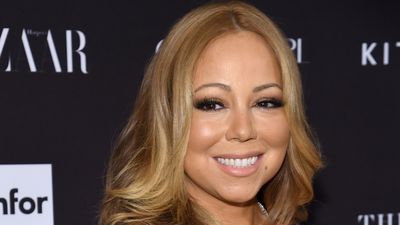 If there is one thing Mariah Carey is known for, it’s her notorious tendency to be a bit of a diva and own the hell out of it. Every time her name is mentioned, her infamous MTV Cribs appearance comes to mind. Mainly due to the fact that it’s everything you could want in an episode of Cribs. She is fabulous and boy, does she know it. She also has the baller pad to prove it, but she has probably upgraded since filming that episode.

Though Carey is still raking in royalties from her super duper Christmas hit “All I Want for Christmas Is You,” she is branching out into a more thespian-oriented career, having just been cast as Commissioner Gordon in the LEGO Batman movie. Additionally, all those secret classes at the Groundlings, UCB, and Second City — don’t tell anyone she was at all three — seem to have paid off, as she is now working with Funny or Die.

She posted a picture to Twitter and Instagram of her lying in bed, fully made up surrounded by some white dudes with recording equipment.

Working from bed… sometimes you have to make the voice-over studio come to YOU. #reallife pic.twitter.com/ueezOYCDed

One of those white dudes was comedy screenwriter and director Jake Fogelnest, also known as that kid who had a show on MTV for six weeks in the ’90s. Jake retweeted Carey’s picture and teased another screenwriter, Alex Blagg with the following selfie of him directing Carey.

While all the gossip rags waxed “OMG” about Carey’s behavior, she clearly is in the kitchen here and that can only mean one thing — she’s filming another installment of her Funny or Die show, Cooking with Mariah Carey.