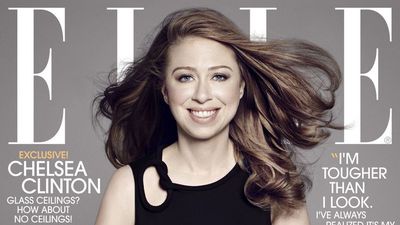 Amid rampant speculation that Hillary Clinton will officially announce her presidential campaign on Sunday, Elle just revealed that a Chelsea Clinton profile is the cover story for the magazine’s May issue. On the cover, the former first daughter wears a black Gucci dress and Cartier jewelry, and in another photo on Elle’s website, she wears an all-black outfit with a Derek Lam blouse, Stella McCartney trousers and Brian Atwood heels.

In the excerpt of the article, Chelsea talks about her No Ceilings initiative, how motherhood has changed her, and yes, about the significance of electing a female president. She says, “And so when you ask about the importance of having a woman president, absolutely it’s important, for, yes, symbolic reasons—symbols are important; it is important who and what we choose to elevate, and to celebrate. And one of our core values in this country is that we are the land of equal opportunity, but when equal hasn’t yet included gender, there is a fundamental challenge there that, I believe, having our first woman president—whenever that is—will help resolve.”

Photos by Paola Kudacki for ELLE