Obama Comically Asks: What If Kanye Ran for President? 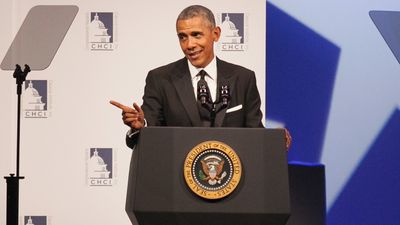 Presidential hopeful Kanye West convened with the actual president over the weekend. As is customary in such meetings of national consequence, expensive sneakers (yes those sneakers) and words of advice were exchanged.

Addressing Kanye as “Peezy” (his official campaign name) Obama said, “You’ve got to deal with strange characters who behave as if they were on a reality TV show.” Catch that Kardashian burn? “Saying you have a beautiful dark twisted fantasy, that’s what’s known as off-message in politics,” he added. “You can’t say something like that.”

Because irony, Obama finished by jokingly asking the crowd, “Do you really think this country is going to elect a black guy from the South Side of Chicago with a funny name to be president of the United States?”

From POTUS to PEEZY