Gigi Hadid Is the New Face of Versace 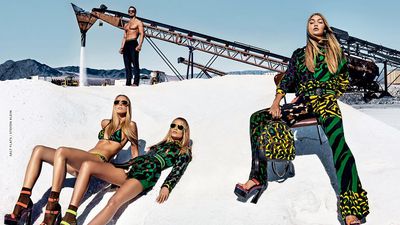 Now the timing of Donatella Versace’s sudden Instagram presence makes sense. For Versace’s new Spring Summer 2016 ad campaign, Donatella cast Gigi Hadid, also known as the “world’s most connected supermodel” per W magazine. Hadid shared a photo from the set with her 9 million Instagram followers yesterday, and today the ads with fellow models Natasha Poly and Raquel Zimmerman are out. Steven Klein shot the campaign on location at an otherworldly salt flat in California.

“This is the Versace woman today, an individual who is proud of her own character,” Donatella Versace said in a statement. “I love Gigi, Raquel [Zimmerman], and Natasha [Poly] and everything they stand for.” Hadid just posed with another gang of models — Lily Aldridge and Joan Smalls — for the new Stuart Weitzman campaign out this week.

Members at The Fashion Spot are into the Versace ads for the most part and one commenter gave it the ultimate compliment: “For the first time of my life, I want to buy a Versace bag.”