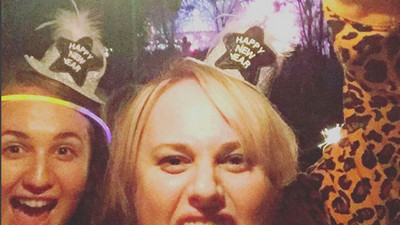 While the rest of us are still over here trudging through the last hours of lame old 2015, Rebel Wilson is in Australia, where it is already the year 2016. But if the small glimpse she’s given the world of the new year so far is any indication, it’ll be a good one, full of fireworks and novelty hats.

During what appears to be an outdoor celebration (another reason to be jealous: it’s summer there), Rebel posted an Instagram video of herself ringing in the new year with sparklers, feathered plastic hats, glow-in-the-dark necklaces, and a whole bunch o’ fireworks.

Her caption, however, offers all those in later time zones a key piece of advice, as well as a tale of caution: “Happy New Year!! Enjoy yourselves and keep safe!! Don’t get too trashed!! Just saw a girl peeing in the bushes.” Great advice for any time of year, really.