Justin Bieber Serenaded the AMA 2015 Crowd in a Trucker Hat 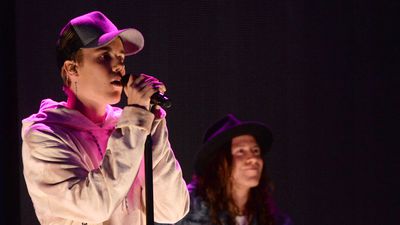 Most guests attending the American Music Awards opted for sequined gowns and suits that look like floral couches. But not Justin Bieber, who first managed to enrage Twitter with his Nirvana t-shirt red carpet look, then changed — not into something nicer, but something even more casual, if that’s possible.

In the show’s final performance, Bieber did an acoustic version of “What Do U Mean,” then “Where Are U Now,” and of course, “Sorry,” all while wearing ripped jeans, an utterly colorless sweatshirt, and a trucker hat, the signature fashion item of Ashton Kutcher in 2004.

Though unforgivable as an accessory, the trucker hat eventually came off during the rainstorm that occurred onstage during “Sorry.” The whole thing was rife with baptismal motifs, so perhaps that was simply Bieber’s way of saying, “About that hat … sorry.”