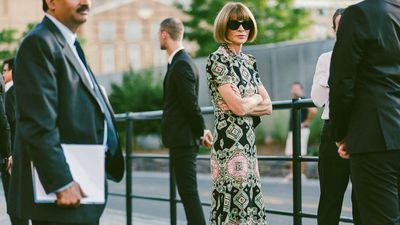 The very first Vogue podcast launched today, and it should definitely be considered as a companion to the magazine’s September issue. The content consists of EIC Anna Wintour and contributing editor André Leon Talley talking through the issue practically story by story, even referring to page numbers. Of course, it begins with that Beyoncé cover, and podcast host Talley asks why Wintour selected Beyoncé to be the focus of her 27th September issue of Vogue.

“I think Beyoncé is every woman. She’s superwoman, she’s an extraordinary business woman, she’s a force of fashion. She totally understands the way to communicate to millions and millions of fans,” she said in the podcast. Then Wintour reflects on her very first Vogue September issue and how much has changed since the beginning of her career:

For my very first September issue, I put Naomi Campbell on the cover. I don’t know if you remember, she was wearing this orange sequin Anne Klein suit that would probably look incredibly ’80s today. But we have this meeting every month where we present the issue to the corporate floor, and I remember all the men in suits being absolutely stunned by the fact that I would put a black woman on the September cover of Vogue. Looking at this issue made me very proud of how far we’ve come and how much the world has changed. That question would just simply not arise today.

Besides discussion about designers like Donna Karan and Riccardo Tisci for Givenchy, Wintour also gets into politics during the podcast, including a possible Hillary Clinton Vogue cover in the future. “One needs experience and Hillary Clinton has that in spades so of course I’m going to support her and of course, she’s going to win.”

Talley even gets her to weigh in on Kayne West’s 2020 presidential run. “If Mr. Trump can do as well as he’s doing, who knows what may happen? I adore Kanye, I think maybe he was just having fun,” she said.