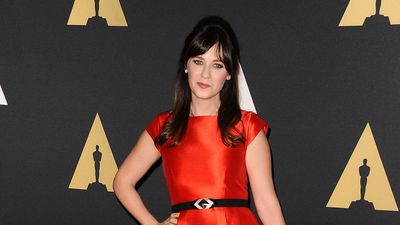 Halloween may be over, but for anyone that has an occasion coming up for which they’re required to dress up like Zooey Deschanel (e.g. a New Girl watch party, or really any holiday event whatsoever), look no further for inspiration than this.

It appears that the last decade of Zooey Deschanel wearing extremely Zooey Deschanel-esque outfits were all just practice, for there has never been a more Zooey Deschanel outfit than the one she wore to this weekend’s Academy of Motion Picture Arts and Sciences’s Governors Awards.

Behold: She not only wears a bright red Kate Spade cap-sleeved fit-and-flare dress, according to Tom & Lorenzo, but accessorizes it with a waist belt, black tights, and rounded-toe ballet flats. Ballet flats.

Is this some kind of ultra-meta performance piece, or can a single human truly have that much Zooey Deschanel inside them?