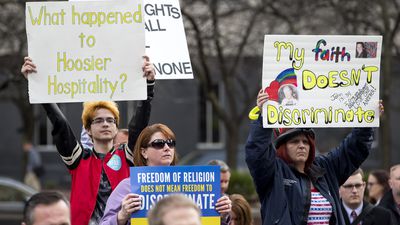 The CEOs of Gap and Levi’s are adding their voices to the protest against Indiana’s controversial Religious Freedom Restoration Act, Forbes reports. Art Peck and Chip Bergh penned a joint open letter posted on Gap’s blog, calling on fellow retailers to speak out against the legislation, saying that it perpetuates discrimination. The letter reads:

Today Gap Inc. and Levi Strauss & Co. are calling on retail and apparel companies, and other businesses, to join us in speaking out against legalized discrimination. Both of our companies have a long history of standing up for equal rights and equal opportunity for all. We have consistently spoken out against discrimination and unequal treatment based on race, sex or sexual orientation. As Indiana, Arkansas, and states around the country enact and consider legislation that perpetuates discrimination, we’re urging State Legislatures to stand up for equality by repealing and voting against these discriminatory laws. These new laws and legislation, that allow people and businesses to deny service to people based on their sexual orientation, turn back the clock on equality and foster a culture of intolerance. Discriminatory laws are unquestionably bad for business, but more importantly, they are fundamentally wrong. They must be stopped. At Gap Inc. and Levi Strauss & Co., we are proud to say we are open to business for everyone.

Apple CEO Tim Cook wrote an op-ed against the bill in Sunday’s Washington Post. Forbes reports that more than 2,000 Indiana merchants have joined a new group called Open For Service, paying a $ 10 joining fee for a window sticker that says: “This business serves everyone.”